Bring Back Our Girls! 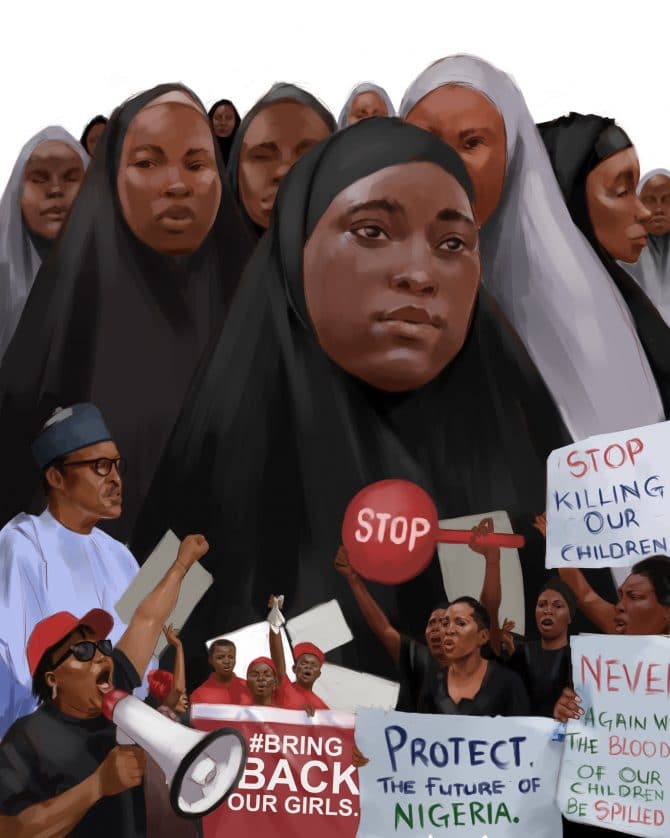 The kidnapping of Nigeria’s young women is not going away.

On April 2014, Boko Haram abducted 276 schoolgirls from their dorm in Chibok, drawing international attention and condemnation. Amnesty International estimates that the terrorist group has kidnapped an estimated 2,000 young women since 2014. Many of them had been forced into sexual slavery, with the Chibok incident the most well-known and widely publicized kidnapping one of all.

In the past month alone, dozens of women in a college in Kaduna were abducted by bandits.

Oboh Moses, our illustrator in Nigeria, created this personal piece to highlight the pain and anguish suffered by desperate parents as well as the helplessness of the abductees. Moses‘ strength lies in creating portraits that are conceptual, figurative, and colourful, imbuing them with character and emotion. The illustration serves as a stark reminder of  the lurking threat that young women in Africa face everyday in their pursuit of education, and of basic human rights.

Boko Haram, the deadliest terrorist group in Northern Nigeria, was founded by Muhammad Yusuf in the year 2002; and has carried out assassinations and large-scale acts of violence in Nigeria’s places of learning due to its fundamental philosophy against education since 2009.

“The group’s initial declared that their aim was to fight against the corruption and injustice in Nigeria, which it blamed on Western influences, and to introduce the Sharīʿah law (Islamic law). The group condemns Western education and urges that the only true teachings are that of the Sharīʿah law. These have lead to attacks and kidnapping on schools and other educational institutions in the northern part of our country,” says Moses.

“I believe in a better Nigeria, but to obtain the future we all desire, we need better governance,” he added.